Posted at 16:00h in about honey by admin_hbodycare

Borioli is a Swiss artist and amateur beekeeper who initially helped his grandfather near his home in Neuchâtel. “I was an artist and needed a subject,” he says. “So I thought, why not?” And bees became his business. The trigger for Borioli was the book by Juan Antonio Ramírez: The Metaphor of the Beehive: From Gaudí to Le Corbusier”, a narration about the history of architecture and the poetics of beehives, and how the image of the beehive had influenced modern architecture.

Using an array of archival images, the book “Hives, 2400 B.C.E.–1852 C.E “uncovers that forgotten history in hive innovation, offering a renewed perspective to challenge conventional narratives. The “story is not presented in a classic linear body”, says Borioli in the book, “but comes in a polymorphic way and combines graphic design, photography and writing”.
The book by artist Aladin Borioli, co-written with Ellen Lapper, strengthens the centuries-old bond between bees and humans–symbolic, artistic and essential, an incredible history which goes back 4,000 years.

Borioli and Lapper explore the history of the beehive, considering the period between 2400 B.C.E. to 1852 C.E. as a symbolic era of hive innovation prior to homogenisation. Beehives have always been built with fragile materials, significantly curtailing their longevity: mud, straw, withies and wood are a few examples. Variations in beehives and keeping bees are as ample as the beekeepers themselves; each beekeeper and each region requires a particular hive. 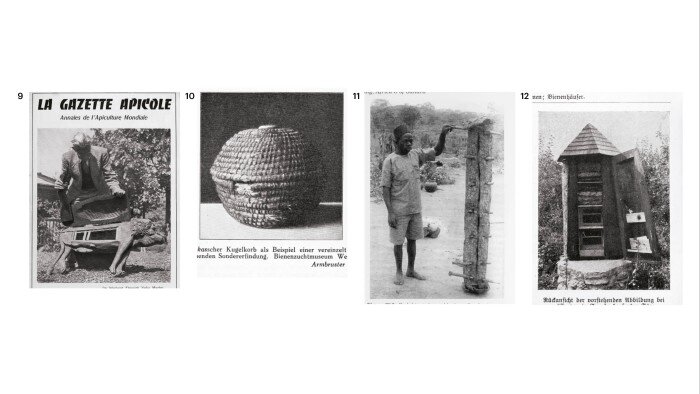 9. A bee population that lives in the belly of a lion 10. ‘Lukasscher’ ball basket 11. Bark stick with pins and bark end caps, Southern Province, Tanganyika (now Tanzania), 1951 12. Rear view of a modern wooden stick, called ‘Die fette Berta des Beekeeper’ , built in the author’s apiary in Prutz, Austria, with the door open in the hinges

The relationship between bees and humans, and vice versa, probably exists since the birth of homo sapiens and could be divided into two main paradigms: honey hunting and beekeeping. Honey hunting is a practice in which hunters locate a wild colony and steal part of the bees’ nest using spears or axes. Evidence of this activity dates back to 6000 B.C.E..

The other paradigm, beekeeping, came later, and gave birth to a new type of relationship between humans and bees. Unlike honey hunting, in beekeeping, bees are kept in a human-made structure on a specific site near the beekeeper’s home, or in an apiary. The earliest solid evidence of beekeeping as a practice dating back to 2400 B.C.E.,

Beehives allow beekeepers to spend more time with bees than hunters; visits are regular and involve a practice of colony monitoring. Keeping bees in hives has substantially advanced our knowledge about bees whilst enhancing and transforming this specific interspecies relationship.

Bees still keep a large sense of independence, behave as they do in the wild, and the transition from honey hunting to beekeeping is a technical adaptation. What has changed is the role of the human: through the establishment of the beekeeper, they have transformed from hunter to guardian. Traditionally, beekeepers made beehives by themselves using abundant materials from their surroundings. However, this process entered a dormant period in the 19th century–and remains inactive today.

In 1851, the Reverend Langstroth designed the now-famous homonym hive, which gave birth to the so-called modern hive. This new hive is not as revolutionary as most beekeeping manuals tend to describe; the supposed innovation of movable frames was probably already in use in Ancient Greece, and definitely active in the 17th century at the latest with the so-called top-bar hive. The real impact of this modern hive came in 1852 when it was patented, starting a process of standardisation and rationalisation in beekeeping practice.

Thus, the new hive transformed modern beekeeping practice into a profit-driven activity, demanding consequent monetary investment. Modern hives made of wood with the standard frame size led to the possibility for, and subsequent development of, mechanic honey extractors. Ultimately, this expansion seems to have prevented beekeepers from inventing new practices and hive designs. Despite the modern hive and its accompanying rational practice spreading across the globe, it is important to note that there are still many places worldwide maintaining different practices and valuing pluralities. 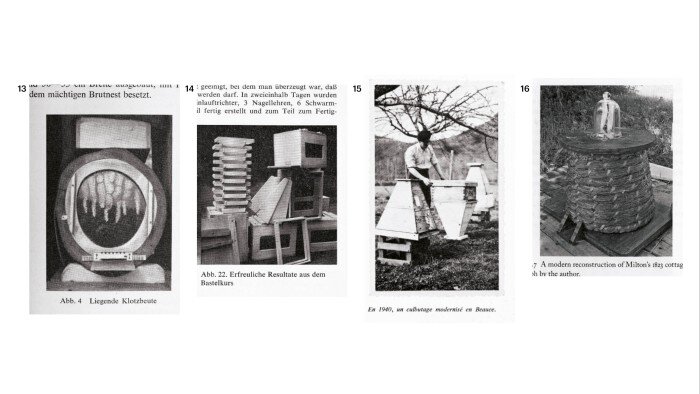 13. Horizontal wooden stick 14. Results of a craft course 15. A modernized slope in Beauce, France, 1940 16. A modern reconstruction of the beehive by John Milton, author of ‘The Practical Bee-Keeper’ (1843)

By symbolically using the period between the first evidence of beekeeping in 2400 B.C.E until the patenting of the modern hive in 1852 C.E., this book aims to tell a different story. In Borioli’s story, the hive is a home, a craft, a receptacle, “an inverted basket”. Along with using whatever was to hand, climatic regional disparities influenced beekeepers’ choices in hive materials, forcing the need for inventive methods and adaptable structures.

From the bark of cork trees; fennel stalks; in Kashmir, two baked clay dishes, “one inverted over the other and sealed together with mud”, did the job; and in Northern Europe, hives were traditionally baskets known as skeps–withies woven together.
With the modern hive the prior history of beehives, the architectural diversity that aided its coming into being, has been forgotten, and difficult to preserve.

As a free association of collection of historical photos, archive material and drawings, this book highlights the role of the forgotten hives as home, craft and receptacle in which, quoting Edwin Heathcote in his article, “bees have been given symbolic, cultural and practical value. Now they are in trouble, maybe we will be asked to re-examine the houses we are building for them to recognise their centrality to our agriculture, our horticulture and, surprisingly, our visual culture.”